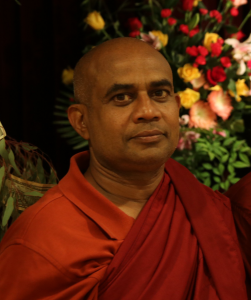 Venerable Kannadeniye Santa thero is the current chief incumbent monk of the Dharmapala Institute. He holds a B.A. and a M.A degree in Buddhism from the University of Kelaniya. He also holds a Diploma in Education(Adyapanavedi) from the University of Colombo and a degree in Thripitaka(Thripitakavedi) from Bikkhu University of Anuradhapura.He is currently the patron of Siddhayaurveda Vaidya Nikethanaya and the director of Sri Vajiragnanodhaya Pirivena in Yakkala Sri Lanka. Venerable Santa thero arrived in US in 2004 and since then served as the abbot of Dharmapala Institute, establishing a strong community involvement in all philosophical aspects of dhamma and reaching out to the member community including both young and old alike. Ven. Santa Thero has extensive knowledge on Buddhist philosophy and teachings and is conversant in both English and Sinhala languages.

A Buddhist Temple, in its physical terms, is a place for people to go in and observe precepts and take refuge in the Buddha, the Dhamma and the Sangha. Symbolically, it is truly a place where all who practice dhamma can take refuge in; it provides a sanctuary to learn, practice as well as teach and share dhamma. Establishing and maintaining a Buddhist temple, especially in a region where such are not widely available, hence, is an enormous ‘kusala kamma’. A temple resembles the harmonious concordance of the monastics and the laity, attesting to the tradition laid down by the Buddha himself three thousand years ago. The community who

A temple resembles the harmonious concordance of the monastics and the laity, attesting to the tradition laid down by the Buddha himself three thousand years ago. The community who supports maintains and work towards the existence of such an institution inevitably shares the great merits, not only by ones’ own practice but also by being true ‘kalyana mitta’ to all others who benefit from it. As the monk who served as the abbot of the Dharmapala Institute for the most part its history, it brings contentment to perceive the growth of this community in their engagement in dhamma with dedication and enthusiasm. Over its twenty five years of history, Dharmapala institute has truly become a sanctum to the lives of many adults and also has come to play an important role in introducing the teachings of the Buddha to many young children. May there be the best of the conditions for the Dharmapala Institute for the continuation of its service to the community for years to come.